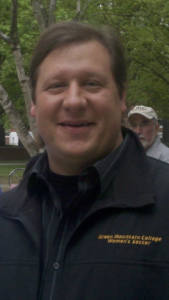 Coach Labate grew up in Northport, NY. He played in a very competitive soccer community on Long Island. Played at Northport HS from 1989-1993. In 1993, he helped the Northport Tigers make it to the Sect A NY State High School Championship. He played at Southern New Hampshire University from 1993-1995, with the Long Island Rough Riders from 1994-1996, and at Castleton University from 1995-1998. After graduating from Castleton he returned the following season as the Spartans Assistant Coach after taking a teaching job with the Rutland City Public Schools. Where he has taught since. He was the assistant at Castleton University for the Men’s Soccer team from 1998-2001. He coached the middle school where he teaches for 13 seasons. Assisted the women at Green Mountain College from 2006-2009. In 2010 he became director of the Rutland Town Rec Youth Soccer program where he helped increase K-2 participant numbers from 16 to more than 50 in one season. He continued the as youth soccer director until 2017. He is a huge Pearl Jam and enjoys his summers off with his family. He resides in Rutland Town with his wife Amy and three children Kate, Julia and Trevor.