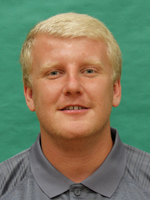 Amir Pasic, who is responsible for a large and quickly growing body of work in the development of soccer in Vermont, is currently the Assistant Men’s Soccer Coach at Castleton University, where he is also pursuing a graduate degree in Athletic Leadership.  With a truly impressive list of accomplishments as a player and coach in his young career, including being named the 2017 Vermont Soccer Association Boys Competitive Coach of the Year, he provides a wealth of knowledge to our players.  Pasic, who grew up in Burlington, holds a United Soccer Coaches Advanced National Coaching License and a USSF “D” Coaching license.  He previously spent time as the goalkeeping coach at Hendrix College.  At Castleton, he serves as goalkeeping coach and is heavily involved in recruiting, travel, scouting, video analysis, and academic counseling.  He also serves as the goalkeeping coach, and the 2013 Boys head coach, for the Vermont Olympic Development Program.

After a stellar career, including a state championship, at Burlington High School, Pasic played three seasons of Division I college soccer at the University of Central Arkansas.  He also played one full season at Castleton University, where he was selected NAC first team All-Conference and 2015 Defensive Player of the Year in the ECAC New England Region.  He holds the all-time goalkeeping records at Castleton for goals-against average and single-season wins.